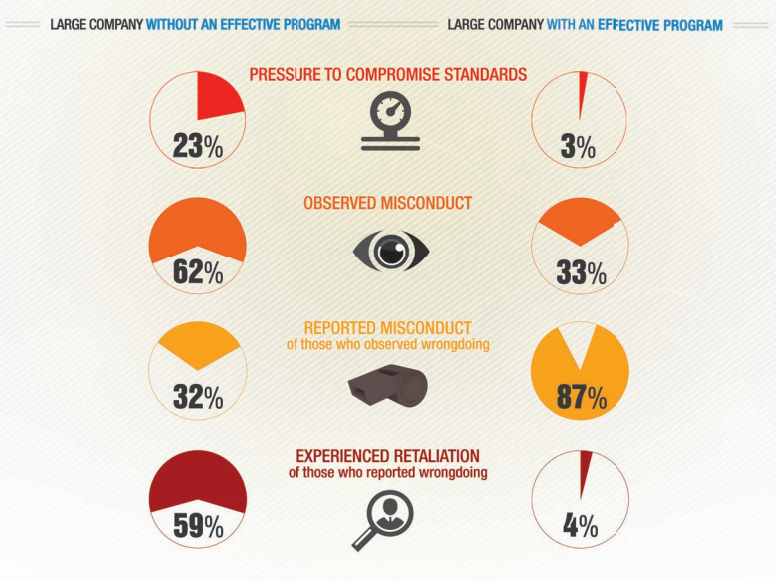 "Companies that invest in ethics reap an enormous return. Better workplace ethics cut business risks by reducing the chance that serious ethics problems will throw companies off course and distract them from their core business"

In the latest National Business Ethics Survey from ECI (Ethics & Compliance Initiative), it's no surprise that an organization's culture, leadership, and values-based ethics and compliance program makes a huge difference in increasing an employee's willingness to report workplace misconduct. Employees feel free from retaliation! The survey, conducted on large organizations of 90,000 or more employees, shows that with an effective values-based ethics and compliance program, employee reporting of wrongdoing increases by 61 percent. These such program also decrease retaliation by as much as 93 percent. The likelihood of retaliation against reporters is also lessened in instances where employees believe that individuals at all levels of the organization are held accountable if they violate company standards or the law.

The term "Tone at the Top", (and "Tone in the Middle") is probably considered over-used now by many people. But even so, it's completely justified. Humans are creatures of habit and we crave acceptance and achievement. So think about it. If an organization is promoting, or allowing, bad behaviour (management / employees get away with: fixing the books, shuffling money where it's not supposed to be, handing out bribes, money laundering, etc.) and these same people don't get reprimanded, that behaviour is seen by others as 'what's done to get the job done, so you should do it too'.  An employee could perceive that questionable behaviour nets acceptance and acknowledgement from superiors, therefore, they must continue in order to feel that emotion of being seen as successful and meeting strict organizational goals.

Bernie Ebbers, the former CEO of WorldCom had the following message to his underlings: "A proposed code of ethics is a colossal waste of time". Employees in the company got the message. That message was to find creative ways to make the numbers. And Walt Pavlo did just that. As the Sr. Manager in billing collections, he felt the pressure to grow the company's revenue and ended up being caught up in one of the largest accounting frauds in American history.

When the largest companies invest resources in ethics and compliance, they get impressive results. The following infographic snippet shows the results of the survey:

It would seem that an ethical culture is not a 'colossal waste of time' after all. A strong ethical culture and effective internal ethics and compliance program are closely tied to workplace behaviour. Each key indicator of ethical performance - pressure to compromise ethics standards, observation of misconduct, reporting of violations, and retaliation for reporting - is greatly improved in large companies with strong ethical cultures driven by the Tone at the Top. Pressure and retaliation become extremely rare in the largest companies when they implement effective ethics programs.

Actually, the same could be said for smaller companies whose existence isn't quite so large. They still involve people who feel pressure, seek acknowledgement, and want to look good in the eyes of their superiors. Ethics policies, on a slightly smaller scale, have the same effect.

Pressure to violate standards and misconduct decline substantially when everyone is working off of the same ethical guidelines. Employees are far more likely to report the misconduct they see, and they are far less likely to face retribution for reporting the misconduct.