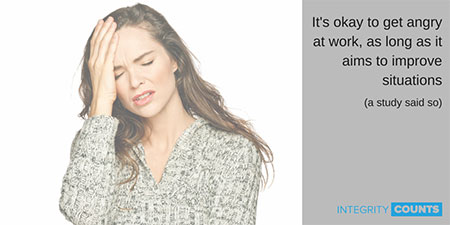 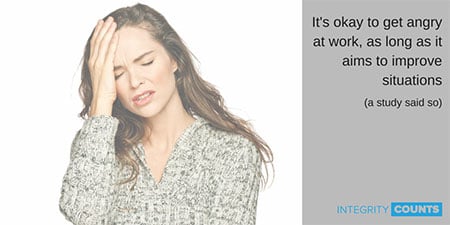 It's okay to get angry at work, as long as it aims to improve situations

And so a University of Liverpool study has concluded. And you know what? It makes a whole lot of sense so read on!

Anger is one of many basic forms of human emotion, just like laughter, passion, pride - and we're allowed to display these emotions in the workplace. Why not anger too?

In a study by Dr. Kirk Lindebaum of The University of Liverpool, and co-authored by Dr. Deanna Geddes from Temple University, it concluded that 'moral anger stands apart from other forms of anger, more usually associated with negative traits like aggression, hostility or bullying'.

This study maintains that moral anger is different from other forms of anger usually associated with negative traits like aggression or bullying. It also maintains that if companies were to quell or obliterate anger all together as an acceptable form of behaviour, then they are missing out on the emotion's 'more socially-functional, adaptive and fairness-enhancing components'.

The study definitely has our attention.

It differentiates 'moral anger' using four key characteristics. The most notable one being that expressions of moral anger must be 'motivated by the desire to defend others or the greater good, and not just facilitate one's own advantage' (makes sense) and that 'this desire must subsequently prompt corrective behaviour intended to improve the social condition, even in the face of significant personal risk'.

Dr Lindebaum said 'Moral anger serves to avoid harm while improving upon or removing an unacceptable situation that violates important moral values.' Well if that doesn't sound like the basis for whistleblowing - an attempt to 'reconcile disparity, repair damaging situations, restore equity and improve the human condition.' And according to the study, whistleblowing is a form of moral anger.

Think about it. It makes perfect sense. Dr Lindebaum said: 'To be classified as moral anger, one's actions must be viewed as ultimately beneficial to society in general, possibly putting oneself at some risk.' Most whistleblowers would agree. Many company policies frown upon bullying and harassment (bad anger) and promote a speak-up culture. For someone to speak-up about something bad they see, it has to affect them in such a way to trigger anger to some extent (good anger). Otherwise they wouldn't come forward.

Not all anger is expressed in a deviant, or harmful manner. What organizations should be doing is differentiating between the bad anger aimed at purposefully harming other employees and the organization, and moral anger brought about by the desire to make a positive change and improve the function of the workplace. This includes allowing whistleblowing.

When organizations attempt to stamp out whistleblowing, what they are really doing is attempting to conceal unethical and morally wrong behaviour that can put employees and the organization at risk.